10 Epic Things To Do In Arugam Bay, Sri Lanka

Written By:
Cazzy Magennis
/
Last Updated:
May 2, 2020
The well know surf paradise of Arugam Bay is filled with adventure. Check out my post on the top 11 things to do in Arugam Bay to have an awesome time! 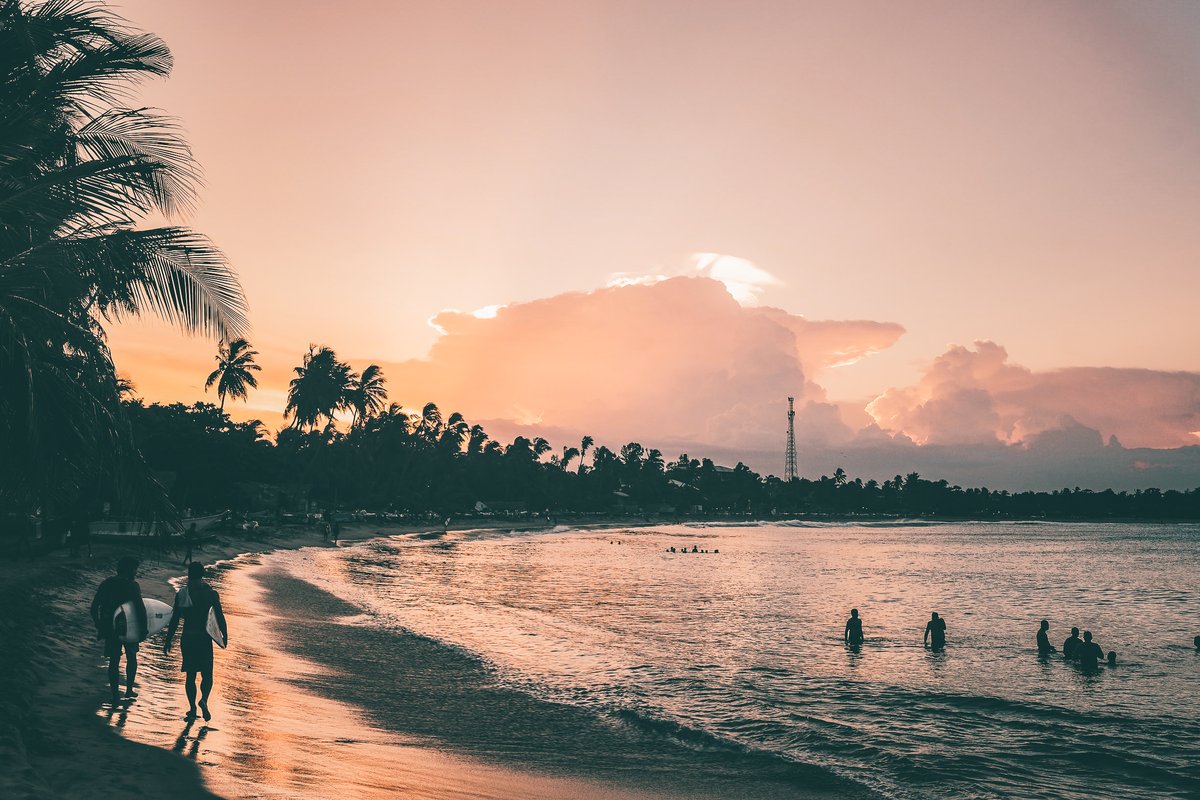 Arugam Bay is one of Sri Lanka's most famous tourist spots.

The area is well known for its parties, beaches and surfing.

There is so much to do in this vibrant and touristy area of Sri Lanka.

To ensure you have the best time, I’ve put together a list of the top 10 things to do in Arugam bay alongside information on the best time to visit, nightlife, food, accommodation and much more.

I hope you enjoy…

How to get to Arugam Bay

There are a variety of ways to get to Arugam Bay and I’ve broken it down from different popular areas:

How to get to Arugam Bay from Colombo

Colombo tends to be the starting point for a lot of Sri Lanka adventures and if you’re heading straight to the bay from there, you have a variety of travel options.‍

How to get to Arugam Bay from Ella

If you’ve been visiting the hill country of Kandy, Nuwara Eliya and Ella, then it’s not too complicated to get to Arugam Bay in search of beaches and sun.

You can either get a bus or train.

It’s about a three-hour journey and there are lots of travel agents in Ella who can arrange your journey for you.

If you have your tuk-tuk then you’ll be driving there and you’ll probably meet some elephants along the way.

For transfers around Sri Lanka, we always recommend using 12GoAsia.

Getting around Arugam Bay

When it comes to getting around Arugam Bay, you’ve got a couple of options at your disposal.

More Info: Our Complete Guide To Getting Around Sri Lanka

Where to stay in Arugam Bay

Arugam Bay is filled with brilliant places to stay and has something to suit all budgets. We stayed in a place called the Lazy Bay.

It was just off the main strip, like literally a 2 minute walk.

The rooms were clean, big, comfortable and the staff were brilliant.

For more options, we’ve put together a whole guide on the best accommodation in Arugam Bay, so you can find the best place to stay.

The top things to do in Arugam Bay

So now we’ve sorted out all the logistics, it’s time to check out the top 10 things to do in Arugam Bay...

Perhaps one of the most obvious things to do in Arugam Bay is surfing.

There are many surf spots around Arugam Bay and something to suit everyone.

Below I list the most popular spots, but you can check out Brad’s guide on the best surf spots in Sri Lanka for more options around Arugam Bay and Sri Lanka.

If you don’t know how to surf, then Arugam Bay is a good place to learn.

It’s more expensive than other spots, so if money is an issue, then the South Coast is cheaper to learn.

2. Catch the sunset at Elephant Rock

Arguably the best area to catch the sunset in Arugam Bay is Elephant Rock.

Elephant Rock is located on the east of the bay and it will give you beautiful views of the area once you climb up.

If you are driving on your own, then take a left at the sign for the navy camp.

There is usually somewhere there, so ask them for directions.

Otherwise, a tuk-tuk will take you as far as they can.

Going on safari in Sri Lanka is one of teh big reasons people choose to visit this incredible country, and the tuk-tuk safari is growing in popularity every year.

Basically, there is a national park around 30 minutes outside Arugam bay called Kumana National Park that allows you to drive through for about 20 minutes before you hit the entrance and have to pay.

This means that tuk-tuks can go down and you can spot lots of animals including, elephants, deer, birds, crocodiles, buffalo and if you’re lucky, maybe even a leopard.

Most tuk-tuk drivers will take you on a tuk-tuk safari if you ask, and the best time to go to catch elephants is around 3 o'clock.

We didn’t get to see any elephants which was a disappointment, but we went in the morning which was the wrong time (we had to leave that day), so definitely go at 3 o'clock!

There is also a museum at the entrance of the national park which is free to visit.

So you as well pop in as you're there. If you wish, you can do an actual safari, but you have to rent out a driver and a jeep.

If you do decide to take a safari experience inside the park, then you find out all the information you need below.

This is located in the tuk-tuk safari route and it offers beautiful views of the area. (You might spot animals from up here!).

There is also a bell that rings around 3-4 pm each day which is a magical sound to hear.

It may not be the easiest of climbs, but it's certainly worth it if you like epic views.

Arugam nightlife used to be CRAZY with beach parties all night long, but restrictions have been placed, and whilst the parties may not be as crazy, they’re still pretty damn good.

You have two main hot spots for partying: these are Mambos and Whiskey Point.

Mambo's have a beach party every week (Saturday night), and the week we were there, they said they weren’t having a party, but we turned up with a group of people we gathered and we had a pirate party, then more and more people came and it actually became a beach party. (I should have been a party planner in another life :P)

If you’re in peak season then there will be parties all the time and lots of opportunities to meet people in hostels etc.

But, at the end of the season, that’s more difficult.

So, Bradley messaged the Sri Lanka backpackers group on Facebook asking if anyone was around for drinks because we were planning on going to Mambos and we met an awesome group of girls and had a great night with them! So don’t be afraid to ask on FB.

The other great party spot is Whisky point which is Friday nights (which is about 15 minutes from the main strip).

You can get free transport out to the point, but you’ll have to get a tuk-tuk back.

The whole strip of Arugam bay is filled with bar areas for drinking and cocktail offers to get you started.

6. Chill on the beach

Just because you’re not surfing (i.e me) doesn’t mean you can’t chill and relax on the beach. One of my favourite relaxing beach spots was Whisky point.

There is an awesome beachfront restaurant there that has cool beach shacks on the actual beach for sunbathing.

They also do delicious food and drinks. So, order some food and relax on the beds whilst watching the surfers catch some waves.

Head for a scenic and relaxing boat trip at the Pottuvil Lagoon (north of the bay).

It’s a gentle boat ride which provides opportunities for seeing local wildlife. The afternoon is a good time to visit.

This is one of the most popular things to do in Arugam Bay, especially because there is a chance to see crocodiles (we saw one massive one dead on the side of the road- eek).

There are lots of tourist companies on the street which can arrange this for you.

The food in Arugam Bay is plentiful, diverse and cheap.

Much more so than other parts of Sri Lanka where you sometimes find yourself limited for choice.

Before I got to the bay I did some research on prices of food etc, and one blog said you can’t get a meal for less than $5.

Maybe that is truein peak season, but for us most meals cost between $2-3.

Kottu Roti (the most popular local dish in Sri Lanka) is widely available here and it's delicious.

There is also a pizza place called Pizza Hub which is the number one restaurant in the bay on TripAdvisor. We can recommend it.

It’s about $6 for a pizza, which is more expensive, but it's a family run business and made with a wood fire oven.

They are delicious and they even do delivery which is perfect if you’re hungover! :P

Surfing towns and yoga often tend to go hand-in-hand, so it’s no real surprise that yoga is on the list of great things to do in Arugam Bay.

There are countless hotels that offer free yoga, even on the rooftops.

Even at the end of the season, they were still advertising yoga in some hotels, so if you want a chance to find inner peace, then this is a good spot to do so.

It’s also a nice way to meet other people.

I’m not a massive yoga buff (I used to do it when I was younger), but yoga is a great way to stretch those muscles after a day of surfing.

Arugam has such a laid back vibe, and a lot of people come here for one reason: to relax!

It’s the perfect location in Sri Lanka to do so. Simply book yourself into a nice hotel, chill on hammocks, read books, swim and drink cocktails.

Sometimes doing nothing is the best thing, especially if you’ve been travelling through Sri Lanka for a while (like we had).

When is the best time to visit Arugam Bay?

September is the very end of the season with the closing parties happening on the second last to last week but there is still stuff going on.

We visited in September, just the end of the season and there were still plenty of people but no surf left (basically).

Don’t worry though, the south coast is bursting with surf in Mirissa and Unawatuna.

Don’t visit after October as everything will be shut down.

Accommodations will close, and food places will close so as you can imagine, there won’t be much of an atmosphere.

How long should I stay in Arugam Bay?

If you’re planning on surfing and partying then you could easily spend a week in Arugam Bay, but I personally think the optimal time is 4-5 nights.

We stayed 4 nights and probably would have stayed longer if it was peak season.

Where to after Arugam Bay

If you’re looking for your next place to go after Arugam Bay, I suggest two places.

If you want more beaches and sun, then head to Unawatuna, or if you want cooler weather and breathtaking scenery, then head to the hill county area of Ella and Nuwara Eliya.

What Next To Read? Our 3 Week Sri Lanka Itinerary