Written By:
Cazzy Magennis
/
Last Updated:
January 18, 2021
When visiting Santa Ana we took a trip to the amazing Santa Ana Volcano hike. With a stunning crater lake & beautiful views, it's a must do in El Salvador 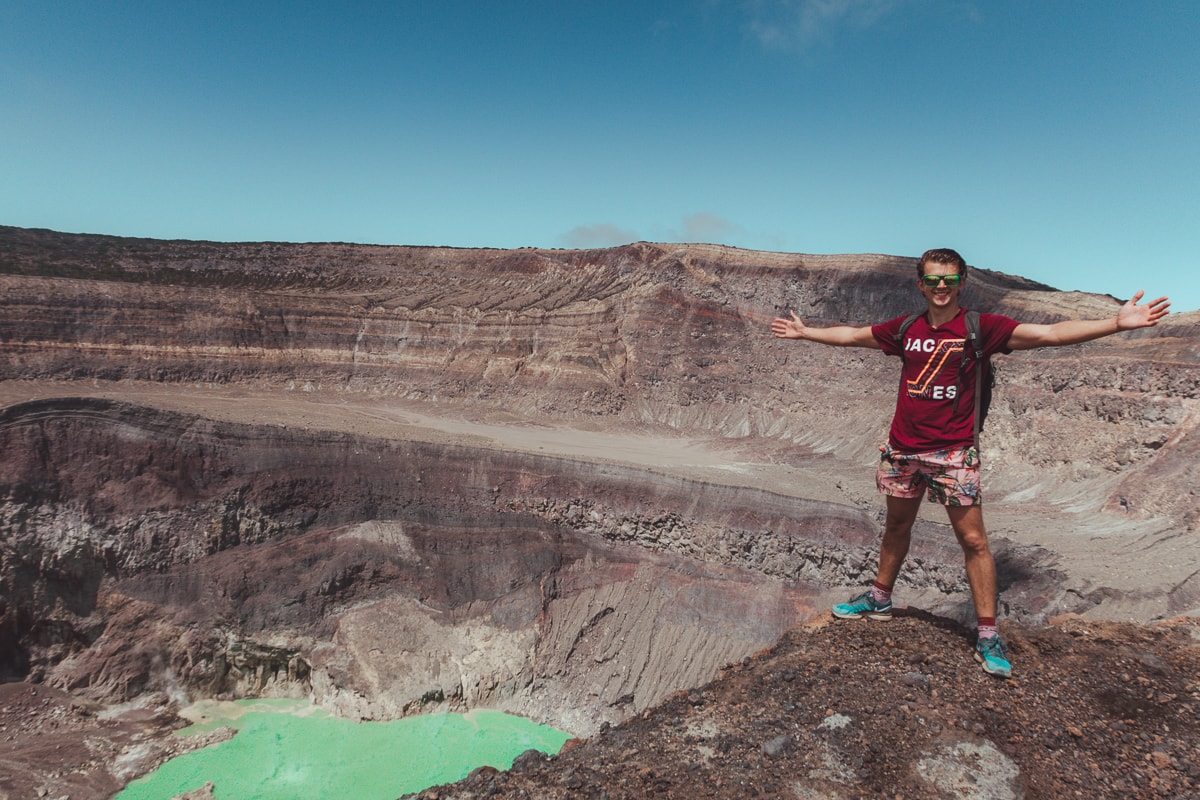 What is the Santa Ana Volcano?

If you’ve just come from Guatemala, or Nicaragua, then you’re probably thinking “Gawd, no more volcanoes!”,but trust me, this one is different.

This volcano has a stunning crater lake at the top, in the crater. It’s a beautiful green/blue colour and you seriously have to see it to believe it. It’s amazing.

It’s filled with sulphur, so no swimming in there I’m afraid. And if you don’t know what sulphur smells like, then it smells like eggs.

You’ll gradually get used to it, but it will stink to begin with.

It’s not just the stunning crater lake that is amazing, but the panoramic views of the Santa Ana lake (which is good to visit for lunch too as you can swim! and nearby towns is breathtaking. You could spend hours up here!

Facts about the Santa Ana Volcano

How to get to Santa Ana Volcano

So, Santa Ana isn’t exactly a backpacker hub quite yet, but it’s still worth visiting for its beautiful cathedral, cute squares and the Mayan ruins that are quite close to it!

Due to it’s low backpacker scene, there aren’t exactly tour companies who organise a Santa Ana volcano hike, but don’t worry, it’s SUPER easy and cheap to do it yourself.

We stayed in a hostel called “pool house hostel” and they did offer transport there and back, but it’s not worth the money compared to how easy it is to do it yourself.

So, to get to the Santa Ana volcano hike, you’ll have to pop on a chicken bus.

Don’t worry, I know the chicken buses tend to have a bad reputation, but we used them a lot in El Salvador and they’re comfortable, safe and cheap!

It’s going to be an early start, as you’ll need to get the #248 bus at 7:30am from La Vencedora bus station. (Pool hostel will drop you there for free!)

There is a grocery store across the road if you need to pick up snacks.

The bus is around $1 and it will take around 1 hour and 30 minutes. This is because chicken buses stop and pick up lots of passengers along the way.

(you could also get a taxi, which would probably cost around $20-25 dollars -one way-  which will be quicker- but up to you!)

The Santa Ana volcano is located in the beautiful Cerre Verde National Park and the bus driver will tell you when to get off the bus once you are there.

You pay a fee at a little window to enter the general area (it’s actually unclear what this is for, but it’s only $1)

When you do the Santa Ana Volcano hike, you do it as a big group and a guide. Technically the guide is free, but you tip him $1 each for good gesture. They don’t get paid to take you up otherwise!

Anyway, you’ll get there around 9.30 and the hike doesn’t start until 11 am, so that gives you a chance to catch breakfast at the wonderful and very modern restaurant built there.

There are also “cheaper” outdoor shacks selling food and drinks, but the restaurant is clean, well priced and the breakfast was good! Plus, the views are amazing.

After breakfast or a coffee, head down to the meeting point and get ready. Someone will read instructions and information in Spanish, then usually someone will translate it in English.

There were about 15 people in our group!

You need two litres of water per person, and bring some fruit or snacks if you think you’ll get hungry.

The hike itself is 2 hours up (approximately) and quicker down. When you reach the top, you’ll have about half an hour to rest, take pictures etc.

Btw, you will be escorted by police men up the volcano, but don’t be alarmed. It’s just a precautionary thing.

Before you enter the official volcano area (i.e the base because you head for the crater) you pay into the national park and it’s $6 each. (cash only)

Before you head up from there, there is another shack selling food and snacks and some toilets!

When you head back down, you will return to where you started, and you’ll have to wait for the bus back to Santa Ana which leaves around 4ish.

Actually, Brad and I didn’t get the bus home. Basically we begin friendly with two american guys on the hike who had already got a taxi booked and they offered us a ride for free! (If they ever read this...thank you for your kindness!)

The journey took half the time than the bus and it was Valentines day so it was nice to get back early to start getting ready for dinner!

Like any hike, there is a challenge, but in our group we had a range of different fitness levels and we all did it.

It’s not difficult, and you can do it. During the time I hiked it, I was probably in the worst fitness level state of my life. I used to be a obsessed gym bunny for about 10 years, but I’ve relaxed in recent years (because I deserve it hahah), but I did it and I survived!

You just do it at your own pace. There are plenty of rest stops, and there is no rush. Don’t feel rushed!

The first part of the hike is all downhill anyway, then a slight incline until you reach the base of the volcano, then it’s an incline. But not drastic and it kind of just increases gradually in circles.

Don’t wear flip flops as there are lots of rocks near the top. But you don’t “need” hiking shoes either. I wore a decent pair of nike trainers and I was fine!

Other tips for the Santa Ana Volcano hike

You can still do this hike even if you don’t plan on staying in Santa Ana (but I think you should!). Tours go from El Tunco area quite frequently, but I think it’s expensive for what it is.

They are like $40 or more and put it this way, it costs $3 on a bus to get from El Tunco to Santa Ana in the first place!

So there you have it, my guide to the Santa Ana volcano hike. I really enjoyed this hike and it was one of my highlights in El Salvador.

Is El Salvador safe to visit?

Yes. It’s one of the safest places I’ve ever felt it. I’m of the opinion that if you take the normal precautions (don’t fault wealth, walk about at night, get drunk and make yourself vulnerable) then you’ll be okay anywhere.

The people of El Salvador know the reputation their country has, and they want to change that. They are such nice people.

We rode the chicken buses everywhere, and walked around at night in Santa Ana with ease (stuck to normal places). But El Salvador is an undiscovered beauty. There is no reason you shouldn’t include it as part of a central america backpacking itinerary.

It’s just as safe as Nicaragua, and Guatemala.

Where to stay in Santa Ana?

One last thing, there isn’t a lot of choice in Santa Ana, but I can suggest the Pool house hostel as that’s where we stayed for 3 nights in a private room (they had dorms too).

They have a pool, Netflix, a shared kitchen, free tea and coffee, water and cookies!

If you’ve been on the Santa Ana volcano hike then tell me about your experience below!