Getting A Sak Yant Tattoo In Bangkok [+ How You Can Get One!]

Written By:
Bradley Williams
/
Last Updated:
May 2, 2021
Probably like yourself, I had never even heard of a Sak Yant tattoo, but I was so drawn in by how unique it was that I quickly decided I had to get one. 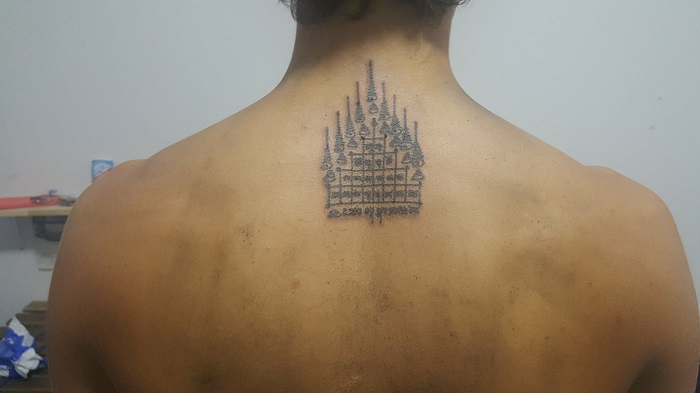 Months before we ever decided to travel across South East Asia, I saw this post from The Expert Vagabond.

It documented his experience of getting what is known as a Sak Yant tattoo.

However, getting a Sak Yant in Bangkok is no simple task. And after trolling the internet I was still left a little apprehensive and worried about the whole experience.

That’s why I decided to write this post on getting my Sak Yant done at the Wat Bang Phra temple just outside Bangkok.

If you’re looking to get one, then hopefully it will help you out … let’s get started.

First off, what even is a Sak Yant?

I don't pretend to be an expert on the origins of Yantra tattooing, but a quick search found that it dates back as far as the 9th century.

It was originally thought to have come from Cambodia when it was known as the Khmer regime.

Nowadays, however, it appears that this traditional form of tattooing is more closely associated with Buddhism and Thailand.

The basic Sak Yant design is a 9-spire design that is drawn at the base of the neck. It is known as a Gao Yord.

It is believed that the tattoo holds sacred magical powers and can help protect those who have them.

Many Buddhists regularly revisit the few temples that still practice this art, and some have beautiful designs stretching all over their bodies.

Just check out the guy below!

Where do you get a Sak Yant done?

The art of drawing Sak Yant is one that is greatly respected amongst Buddhist culture, and trained monks will dedicate their whole lives to honing their skills.

There are a few temples across Thailand that are famous for still allowing Westerners to receive a Sak Yant.

Possibly the most famous is Wat Bang Phra, situated just outside Bangkok, which is where I had my Thai tattoo done.

It is here that the most famous practitioner of Sak Yantra tattooing resides: Master Luang Pi Nunn.

Luckily for me, he is the monk who performed my very first Sak Yant.

It appears there are other famous monks as well, such as Ajarn Noo Kanpai who was responsible for tattooing Angelina Jolie.

Note: It also sees pretty common for people to get a Sak Yant in Chiang Mai. If that's something that interests you, then you can find out more here.

Getting a Sak Yant in Bangkok

After reading the post by the Expert Vagabond, I was still left with many questions about how to actually get my Sak Yant tattoo done.

Here are the best answers I can offer regarding the most common questions you might have.

Where is Wat Bang Phra?

Wat Bang Phra is situated roughly an hours drive outside of Bangkok. It is probably the most famous Sak Yant temple in Thailand.

How much does it cost to get there?

It’s too far to get a Tuk Tuk, so your easiest options are to either get a taxi or an Uber.

We paid 450 Baht for our Uber ride out there, and then paid him a further 600 Baht to wait around and take us back again.

After reading online, it appears that’s a pretty good deal, as taxi drivers will charge you more each way and will then charge you much more for waiting around for 3 hours whilst you are in the temple.

How long does the tattoo take?

The tattoo itself takes about 15 minutes, but it is the waiting around that takes the longest.

When you enter, the room could already be full of other people waiting their turn.

It took us about 2 and a half hours to slowly shuffle to the front of the queue.

What time should I arrive?

The earlier you arrive the better, as the queue gets quite long very quickly.

We arrived just before 8am and already had a room that was packed.

Really it's up to you, but I would say aim for before 7:30am and expect to wait at least a couple of hours.

How much does the Sak Yant cost?

The Sak Yant is perhaps the cheapest tattoo you will ever receive.

Outside the door, you purchase a pack of incense and cigarettes for a total of 70 Baht (roughly £1.60 or $2 at the time of writing).

You just take this inside and place it in a bowl in the center of the room. As it gets full and nearer to the front, everyone will bow their heads in prayer whilst the monk accepts the offering.

Where do you go once you’re there?

As you arrive at the complex you want to head to the left of the car park and straight towards an office-like building inside one of the temples.

You should buy your offering outside and then remove your shoes outside of the door.

It appears that people have different experiences upon entering, but this is my take on it.

As you enter, directly on your left is a monk performing Thai Sak Yant tattoos using the old-fashioned method of effectively stabbing your back with a large needle.

The men here seemed annoyed by my presence and ushered me on up into the next room (there is a door straight ahead of you and on the left).

You will then be inside the room where I, and also the Expert Vagabond, had my tattoo done.

You basically head to the back of the mass of people and sit down, then slowly edge your way closer to the front over the course of a couple hours.

After entering this room, you can head left and go upstairs again which takes you into a room with only a few people who are waiting to pay a lot more money to get a professional Sak Yant done.

Get Your Guide offer a tour that you can view by clicking here. I believe this takes you up to that room. The tour itself is actually pretty good value. It comes in at less than $100 and means you don't need to worry about paying for any of your own transport or speaking to the Buddhist monks when you arrive.

Another brilliant tour is offered by ForeverVacation which comes in at under $70.

What do they tattoo you with?

The traditional method of drawing a Sak Yant is shown in the image below. You might well know it as a bamboo tattoo.

However, the only monk performing this did not seem happy with me receiving it this way.

Instead, I was ushered into the second floor where they were being performed by the famous Master Luang Pi Nunn using a modern tattooing gun.

I’m not sure if you have much choice, to be honest, and maybe it is based on whatever Master Luang Pi Nunn is feeling up to using on the day.

Regardless of which method the monk uses to give you the tattoo, they use the same needle continuously for many people, and re-dip the tip in the same ink again and again.

This is worrying if you think about the potential of Hepatitis or AIDS being transferred.

However, there seems to be no apparent cases of anyone having contracted an illness from a Sak Yant tattoo, and I helped justify it by how many people were there getting new tattoos added every month.

If you are nervous, you can head up to the floor above where they tattoo Sak Yants in a much more clinical manner, but charge a lot more.

I can’t remember the exact figure, but it was something closer to $100.

The tour I mentioned earlier is likely done in this room. It costs less than $100 and saves you organising any of your own transport.

I have personally never gotten a tattoo before this one, so I was extremely nervous, to say the least.

I got pretty anxious as it got closer and closer to being my turn. But there is no time to wait between tattoos, and I had my friends and girlfriend there who had all just waited more than 2 hours, so had no option of backing out!

When receiving the Sak Yant, you take your top off and sit down in front of him and rest forward on a triangular cushion.

He will then place a template on to get the position right and then draw the entire thing freehand (he really is a master, as the finished tattoo is incredibly detailed).

As mentioned, I’ve never had a tattoo before so I guess this comes down to your pain threshold.

I personally thought I have a pretty good pain threshold … now I’m not so sure.

The tattoo itself felt as if he was slowly going up and down the same point on my back with a candle.

I quickly forgot about any nervousness as I had nothing left to focus on but the pain and getting through it.

I probably sound like a complete wuss to some people, but it doesn’t bother me.

If you can sit in that room and get, what felt like, burned by a monk for 15 minutes, whilst a room full of 40 people sit there silently staring at you and come out feeling no pain, then I salute you.

Am I allowed to get one?

I was worried that we would be turned away because we were Westerners, but our presence in the room only seemed to cause minimal interest.

You should be OK, just be polite, respectful and obey the basic rules they have. This includes no photographs inside of the tattoo room (the images in this post of inside the room were not taken by ourselves).

Would you recommend it?

Personally, I absolutely loved the finished design, just check out the picture below!

I really can’t believe the level of detail he put in, especially having just sat there for almost 3 hours doing tattoo after tattoo with no breaks!

I said I would never get a tattoo but, stupid as it sounds, I don't view this as any old tattoo.

To me, it is something unique that holds a story and some real character.

Put it this way, if you're looking for things to do in Bangkok, you should consider this!

Is there anything else you should know?

The process of getting a Sak Yant tattoo done in Bangkok can seem stressful and confusing, but I hope this post at least helps clear things up for some people.

I think I’ve included everything I can above, but am happy to answer any questions you have.

As always, just leave a comment below with your questions and I will get back to you as fast as I can!

I would recommend checking out this article here. It details the Sak Yant rules you should follow after having received a tattoo.

I don’t think I would make a good monk, as I probably broke half of these within about 48 hours (shhh, don’t tell Master Luang Pi Nunn).

If you want a bit more information on getting a Sak Yant in Bangkok, here are some useful pages you can visit: